Village Radio Library began in a very small way some 37 years ago. In those days when records had been donated the tracks were handwritten down by Alan Brammer and posted to friend, Tony King in Wellington, who would enter these details onto his computer, print them out and return the printout to Village Radio. The list was then put into a file, which we still have in our archives. 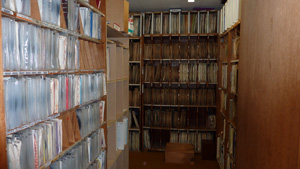 As paper lists became very worn and longer it was felt that we should have our own computer database. Maureen Wood, Kel and Ann Raine, Ray Needham entered the data into our computer in the early days.

The computer program we used back then only allowed a limited number of entries and as the library grew it was felt that a program with an unlimited capacity was required. Kel Raine's son-in-law, Graeme Urlich kindly designed and installed our current software program. Sheila Lacey became the librarian after the retirement of Kel Raine in 2009 and after over 3 years handed over to Cherry Feasey who became a dedicated librarian until her retirement in June 2016.  It is now in the capable hands of Eileen Roach.

In the early years the library had very few records but of course the amount grew mainly by the donations from listeners. Some of the records date from the early 1900's. We have one of the largest collections in New Zealand.    We have over 120,000 tracks, approx 18,000 records, and now among the collection CD's and some 10,000 different recording artists. We have 27 different music categories. The announcers are able to collate their programs from this list as each record has been coded and put into it's appropriate shelf.

We even have a section of Special Occasions such as the Lunar Landing in 1969, Churchill's speeches of World War II, Peter Snell's winning race, Winston McCarthy and many more, but we would like more of the New Zealand Historical events.

If you would like to see our extensive Library we are at the Station every day and would love to see you.